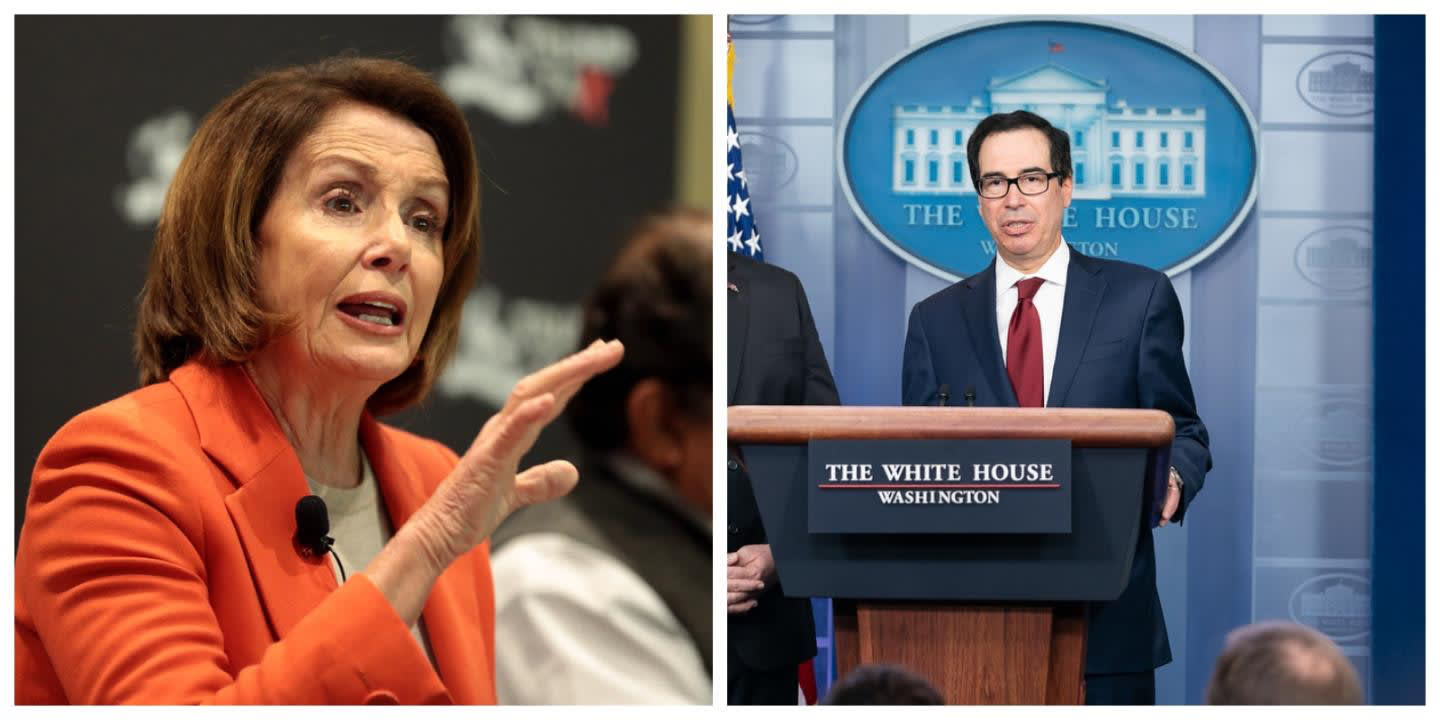 What's the status of the "Phase 4" coronavirus relief bill? Talks continue, but progress on a deal remains elusive

Do you want Congress to reach a compromise on a new coronavirus relief bill?

UPDATE 9/29/20 (3:15pm EDT) - White House and Democrats resume conversations over a relief package, but are yet to make significant progress on a deal.

“This is not about dollars, this is about values. These investments will not only help crush the virus, they will also help bolster the economy. The Administration’s continued failure to acknowledge the funding levels that experts, scientists and the American people know is needed leaves our nation at a tragic impasse.”

“I think that if we do a COVID deal right now, we ought to just do a continuing resolution as part of that solution so that we take a shutdown off the table… I think the speaker is going to hold out until the end of September and try to get what she wants in the funding for the government during the CR or whatever funding mechanism happens to come up at the end of September.”

“An overture was made by Secretary Mnuchin to meet and he made clear that his televised comments from earlier today still stand: the White House is not budging from their position concerning the size and scope of a legislative package. Democrats have compromised. Repeatedly, we have made clear to the Administration that we are willing to come down $1 trillion if they will come up $1 trillion. However, it is clear that the Administration still does not grasp the magnitude of the problems that American families are facing. We have again made clear to the Administration that we are willing to resume negotiations once they start to take this process seriously. The lives and livelihoods of the American people as well as the life of our democracy are at stake.”

“Earlier today, Speaker Pelosi and I spoke by phone. Her statement is not an accurate reflection of our conversation. She made clear that she was unwilling to meet to continue negotiations unless we agree in advance to support her proposal, costing at least $2 trillion. The Administration is willing to move forward with legislation that allows for substantial funds for schools, child care, food, vaccines, hospitals, PPP for small businesses, rental assistance, broadband, airports, state and local government assistance, and liability protection for universities, schools, and businesses. The Democrats have no interest in negotiating.”

“I hoped this week we’d be finalizing major legislation. After all, American families are struggling and need help. But Speaker Pelosi and Leader Schumer decided not to deliver. I am glad the president stepped in to soften the blow of their hostage tactics.”

“Rather than compromise, our Republican counterparts said ‘take a hike.’ Quite literally, they said this in the room: “No, it’s going to be our way or no way. We’re not going to meet you in the middle.” Why? Why wouldn’t they? When the needs are so great, when the needs are so great, when there are so many people are suffering and so many more who will suffer if we don’t act.”

UPDATE 8/5/20 (2:45pm EDT) - McConnell to keep the Senate in session for at least one more week while negotiations continue.

“We’re certainly going to be in next week. We’ll see what happens after that.”

UPDATE 8/3/20 (2:25pm EDT) - Speaker Pelosi says a deal may not be attainable until next week as negotiations continue.

“There’s a long list of things that are needed. And the good news, our Republican colleagues agree with a few of them, but some they don’t agree with. And we are discussing why we think they need them and they’ll counter with others in the room, Mnuchin and Meadows.”

“There’s no reason we can’t come together and reach an agreement this week, and get relief on the way to those who need it most. The Senate should not recess. We should not go back home for the August break until the next coronavirus bill is complete.”

“It’s like a giraffe and a flamingo. They’re both at a zoo. A dumb person may think they could mate for offspring. A smart person knows that’s impossible. That’s our bills. They’re unable to mate.”

“Let me speak for myself, I am opposed to non-germane amendments. Whether it’s funding for the FBI building, or for example, in the House bill, whether it’s a cut for high-income earners in blue states, or other non-germane amendments in the House like marijuana studies or aid to illegal immigrants. When we get to the end of the process I would hope all non-COVID related measures are out -- no matter what bills they were in at the start.”

What are some sticking points in “phase 4” negotiations?

What are some areas of agreement?

What were the prior coronavirus relief bills?