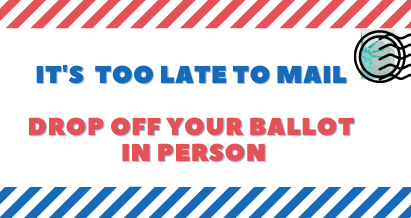 ALERT: Drop your ballot off in person — here's how

Share this info to ensure every vote is counted

With less than a week to go until Election Day, the United States Postal Service is recommending you do NOT mail in your ballot.

"[A]s a common-sense measure, you mail your completed ballot before Election Day, and at least one week prior to your state’s deadline."

In May, the USPS' top lawyer advised voters to put their ballots in the mail no later than 7 days before Election Day "to account for delivery standards and to allow for contingencies.”

This year, mailing your ballot in close to Election Day is especially dicey because of three things:

Most deadlines for mail-in ballots fall on Election Day, but not all states have the same criteria. In Louisiana, for instance, ballots must be received by Monday, November 2. And the Supreme Court just quashed a Wisconsin court order that said absentee ballots could be counted up to six days after Election Day.

Justice Brett Kavanaugh wrote that Election Day mail-in deadlines were devised “to avoid the chaos and suspicions of impropriety that can ensue if thousands of absentee ballots flow in after Election Day and potentially flip the results of an election.”

“Those states also want to be able to definitively announce the results of the election on election night, or as soon as possible thereafter.”

Kavanaugh's statement echoes those made by President Donald Trump, who tweeted on Monday that election officials “must have final total on November 3rd,” alleging - without evidence - that there are “big problems” with mail-in ballots. (Twitter labeled the tweet “misleading.”)

At this point, if you still haven't put your ballot in the mail yet, it would be advisable to drop it off at a drop box or vote in person.