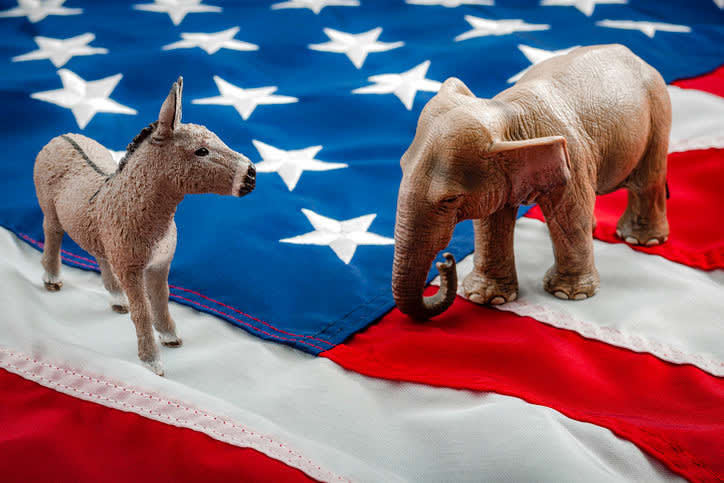 The 'For the People Act' would reform campaign finance, protect voters, and improve government ethics

Do you support the For the People Act's passage?

The For the People Act (H.R.1) is a sweeping voting rights initiative.

The bill is divided into three sections focused on Election Access, Campaign Finance, and Ethics.

Those in favor argue the current political system is broken, corrupt, and badly in need of reform. This bill attempts to remedy that by ending money’s influence in politics, re-enfranchising felons, strengthening voter protections, and making it easier to vote.

Opponents argue that some of this bill’s provisions reach beyond the limits of what Congress is constitutionally allowed to do, as it undermines Americans' First Amendment rights to political speech. Additionally, Congress has more urgent issues to focus on, such as economic recovery and equitable COVID-19 vaccine distribution.

The House-passed bill still faces the prospect of a GOP filibuster in the Senate.

What are the bill's key provisions?

Overall, the For the People Act seeks to reduce money's influence in politics, restore ethics and integrity to government, and strengthen voting laws. To achieve those aims, these are a number of its key provisions:

What are people saying?

Sponsoring Rep. John Sarbanes (D-MD) reintroduced this bill from the 116th Congress to ensure elections’ integrity and protect the right to vote. In a joint statement after reintroducing this bill, Rep. Sarbanes and House Speaker Nancy Pelosi said:

“Our democracy is in a state of deep disrepair. During the 2020 election, Americans had to overcome rampant voter suppression, gerrymandering and a torrent of special interest dark money just to exercise their right to vote. Across the country, people of all political persuasions – including Democrats, Independents and Republicans – are profoundly frustrated with the chaos, corruption and inaction that plague much of our politics. That’s why House Democrats are doubling down on our longstanding commitment to advance transformational anti-corruption and clean election reforms by again passing H.R. 1, the For the People Act. H.R. 1 will protect the right to vote, ensure the integrity of our elections, hold elected officials accountable and end the era of big, dark, special-interest money in our politics. Our historic reform effort will clean up decades of dysfunction in Washington, return power to the people and build a more just, equitable and prosperous country for all Americans.”

The Biden administration has declared that this legislation’s passage is a major priority. In an interview with Rolling Stone, Rep. Sarbanes noted that he had been having conversations about this bill with the Biden-Harris transition team “for a number of months”:

“[T]hey recognize that, coming off of this election and also recent events, that Americans need to have their faith in the kind of basic tenets of our democracy restored after all that we’ve been going through. We know that President Biden wants to try to bring the country together and heal some of these divisions, and one way to do that is to revisit and go back to basic principles of our democracy — the right to vote, the notion that public officials will act in public interest, not special interest, the idea that government should be dependent, as James Madison said, on the people alone, not overly dependent on big money and special interests. All of this goes back to first principles in terms of how our democracy functions and how our republic was founded. If people don’t have confidence that their vote is what makes the difference about policy in this country and in our democracy, then that cynicism is corrosive to our democracy. This bill is restorative. We’re not going to tear this system down and destroy it; we’re going to cleanse it and rebuild it. I think the Biden team understands that in this moment."

The GOP, which opposed this bill in the previous session of Congress, has continued its opposition to this bill in the current session of Congress. Senate Minority Leader Mitch McConnell (R-KY) criticized Democrats’ attempt to “recycle failed legislation” with their renewed push to pass this bill, which he characterized as a “federal takeover.” He also accused Democrats of wanting to “use the temporary power the voters have granted them to try to ensure they’ll never have to relinquish it.” He added:

“They want to mandate no-excuse mail-in balloting as a permanent norm, post-pandemic. And — I promise I am not making this up — their bill proposes to directly fund political campaigns with federal tax dollars. They want to raise money through new financial penalties which the government would then use to fund campaigns and consultants.”

In late February 2021, former Homeland Security Deputy Secretary Ken Cuccinelli announced the launch of the Election Transparency Initiative to “act quickly to defeat the efforts of Democrats in Washington to federalize election laws through H.R.1, while simultaneously going on offense at the state level to rally the grass roots around meaningful reforms." Cuccinelli’s group intends to focus on three states (Arizona, Montana, and West Virginia) where moderate senators are most likely to break from the Democratic majority on big issues.

“If this bill were to become law, it would be the largest expansion of the federal government’s role in elections that we have ever seen. The harm to the states’ electoral process outweighs the minor burdens imposed on the rights to vote.”

The Institute for Free Speech, an organization opposing regulations on political spending, opposes this legislation. Its president, David Keating, says this bill’s donor disclosure requirement could have a chilling effort on donations. Observing that early backers of the Civil Rights or LBGTQ movements often relied on their anonymity, he said:

“We have a right as citizens to join groups and not report who we are to the government. I think a number of liberal groups, when they sit down and look at this closely, they're going to be really concerned about the scope of this legislation.”

This legislation was introduced against a backdrop of Republican-controlled states seizing on former Republican President Donald Trump’s false claims about a stolen 2020 presidential election to push legislation that would tighten election security. Democrats — whose slim majorities in both chambers of Congress will be at stake in the 2022 midterms — argue that voters of color, who are a key constituency for the party, would be disproportionately affected by these proposed reforms.

More recently, in April 2021, Georgia became the first 2020 battleground state to pass sweeping legislation to roll back voting rights despite a lack of evidence demonstrating widespread fraud in the November 2020 presidential election.