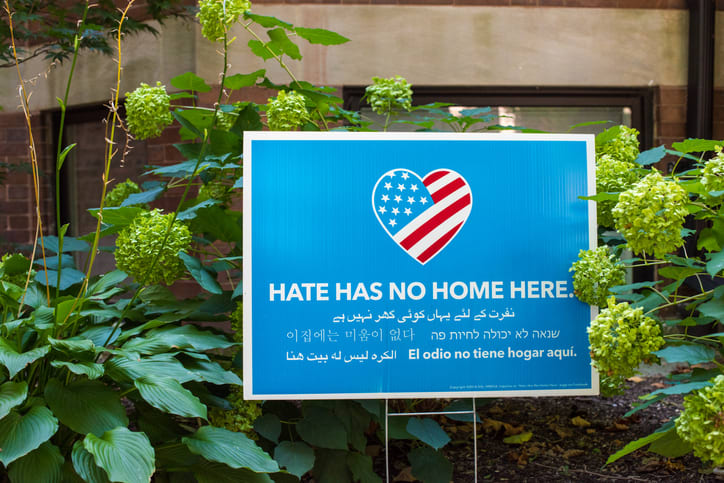 Should the Department of Justice have an employee dedicating to expedited review of COVID-19 hate crimes against Asians?

Do you support the federal government taking action to address hate crimes against AAPIs?

The COVID-19 Hate Crimes Act is a piece of legislation that seeks to address the rise of hate crimes and violence against Asian-Americans and Pacific Islanders (AAPIs) by designating a Dept. of Justice (DOJ) employee to help with expedited review of hate crimes related to coronavirus (COVID-19) that have been reported to federal, state, and/or local law enforcement.

Additionally, this legislation would provide guidance for state and local law enforcement agencies to better address hate crimes against AAPIs by:

Furthermore, this legislation would issue guidance detailing best practices to mitigate racially discriminatory language used to describe the COVID-19 pandemic. This guidance would be issued in coordination with the Secretary of Health and Human Services, COVID-19 Health Equity Task Force, and community-based organizations.

This legislation would define COVID-19 hate crimes as violent offenses motivated by the relationship, whether real or perceived, between the spread of COVID-19 and a person’s background, including their ethnicity and national origin.

What are the arguments for it?

Proponents of this legislation observe that hate crimes and other discrimination against Asian-Americans and Pacific Islanders (AAPIs) have increased significantly during the COVID-19 pandemic. They argue that it's important to ensure that the Dept. of Justice and law enforcement organizations across the U.S. work actively to understand and respond to this issue. Additionally, they note that cultural and linguistic barriers may hinder reporting of hate crimes against AAPIs, so it's important for the federal government to provide guidance on culturally and linguistically appropriate efforts to address hate crimes against AAPIs.

Sponsoring Sen. Mazie Hirono (D-HI) introduced this legislation to address the rise of hate crimes and violence against Asian-Americans and Pacific Islanders (AAPIs):

“We’ve seen the horrifying consequences of racist language as AAPI communities across our country experience hate crimes and violence related to the pandemic. The COVID-19 Hate Crimes Act addresses the surge in violence against AAPI communities by dedicating an official at the Department of Justice to expeditiously review hate crimes reported to law enforcement. The bill also provides resources for communities to come together and fight intolerance and hate. This is no less than victims deserve.”

“The ongoing anti-Asian hate crimes and incidents, especially against our elderly Asian Americans, is absolutely horrific. I am honored to introduce the COVID-19 Hate Crimes Act with Senator Hirono to address this disgusting pattern of hate. Before this pandemic started, I urged everyone—including elected officials—to not blame Asian Americans for the virus. My words were not heeded. The former president and his Congressional Republican enablers trafficked racist, bigoted terms to describe COVID-19. In doing so, their language stoked people’s fears and created an atmosphere of intolerance and violence, which persists even today. Since the beginning of the pandemic there has been nearly 3,000 reported incidents of physical, verbal, and online attacks against Asian Americans. Even in my own district in Queens, New York, Asian Americans have been attacked. To combat those acts, we need DOJ to prioritize addressing these heinous acts by designating a point person for these COVID-19 related hate crimes; make it easier for victims to report crimes committed against them; and expand public education campaigns to address COVID-19 hate crimes and incidents. This must end and it is why we are working to ensure our justice system has the people and resources to effectively account for and mitigate anti-Asian hate crimes.”

President Joe Biden expressed support for this legislation in a March 19, 2021 White House statement after the Atlanta spa shootings:

“I urge Congress to swiftly pass the COVID-19 Hate Crimes Act, which would expedite the federal government’s response to the rise of hate crimes exacerbated during the pandemic, support state and local governments to improve hate crimes reporting, and ensure that hate crimes information is more accessible to Asian American communities.”

“NAPABA applauds Senator Hirono and Congresswoman Meng for their decisive action to introduce legislation responding to the rise in anti-Asian hate incidents during the COVID-19 pandemic. NAPABA is committed to ensuring that hate crimes against the Asian American community are properly investigated and prosecuted. The expedited review of hate crimes reported to federal, state, and local law enforcement by the Department of Justice will increase accountability in addressing hate against our community, and establishing a platform for online reporting of hate crimes and incidents in multiple languages will allow more victims to come forward.”

What are the arguments against it?

Anthony Michael Kreis, a law professor at Georgia State University College of Law, says it is unclear how adding a COVID-19 distinction to a federal hate crime would benefit existing law. In practice, the law already draws connections between current events and discrimination. As an example, the law already allows the prosecution of hate crimes against LGBTQ people whose attackers express anti-HIV/AIDS sentiments.

Critics of hate crime laws in general argue that they’re unconstitutional because they attempt to punish the perpetrators’ motive in addition to their underlying crime, which violates Supreme Court case law recognizing freedom of thought.

Has anti-Asian discrimination really increased during the COVID-19 pandemic?

According to another report by the Center for the Study of Hate and Extremism at California State University, San Bernardino, hate crimes against Asian people rose by 149% in the16 largest U.S. cities. The sharpest increase was in New York City, where there were 28 hate crimes in 2020 versus three hate crimes in 2019. The initial spike in anti-Asian crimes occurred in March and April 2020, coinciding with a rise in COVID-19 cases and ongoing negative associations of Asian-Americans with the COVID-19 virus.

Sound off in the comments: do you support the federal government taking action to address hate crimes against AAPIs?