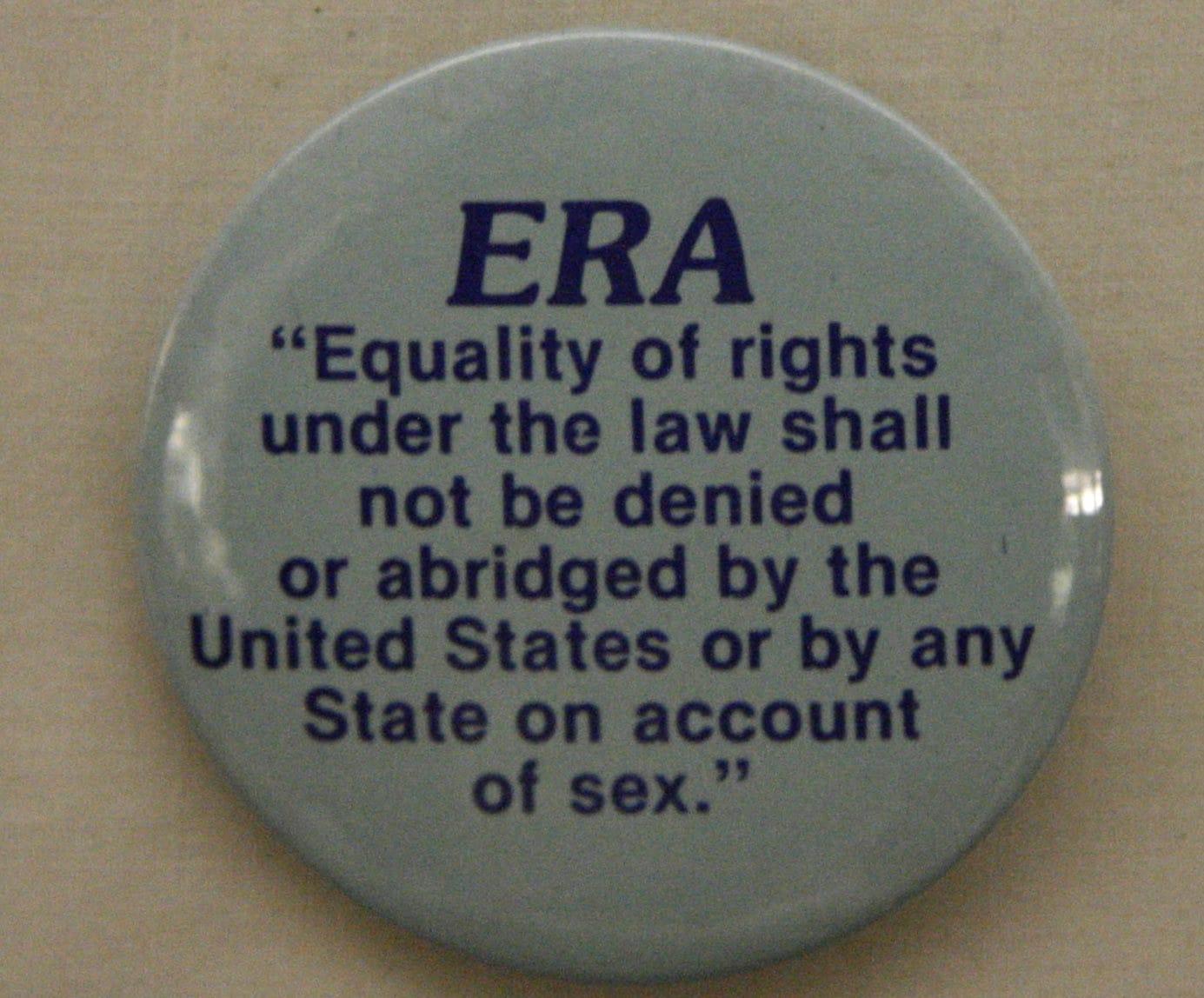 Should Congress eliminate the deadline for ratifying the Equal Rights Amendment?

Do you support the Equal Rights Amendment (ERA)?

This resolution would eliminate the deadline Congress imposed on the ratification of the Equal Rights Amendment (ERA), which would prohibit discrimination on the basis of sex under the U.S. Constitution. This bill’s enactment would negate the deadline Congress imposed when it initially passed the ERA and later extended, effectively allowing the ERA to take effect once it’s ratified by three-fourths of the states.

The ERA was passed by Congress in 1972 and provided states a seven-year time limit to ratify the amendment, which was then extended to 1982 after six years had elapsed. Once the 1982 deadline arrived, the ERA had been ratified by 35 states — three short of the requirement. Following its failure to achieve ratification before the 1982 deadline, the ERA was reintroduced in Congress by those who believed the ratification process would have to begin anew.

However, there are some — including the sponsor of this legislation — who believe that to be unnecessary. Time limits on constitutional amendments hadn’t been utilized prior to the 18th Amendment, so ratification time limits are a self-imposed constraint rather than a constitutional requirement. As a case in point, the 27th Amendment (also known as the Madison Amendment) wasn’t ratified until nearly 203 years after Congress passed it and it sent it to the states.

What's the argument for eliminating the deadline for ERA ratification?

Proponents of eliminating the deadline for ERA ratification argue that it makes no sense for the Equal Rights Act ratification process to start fresh after 38 states — the number needed for ratification — have already approved it. This is especially true in light of the fact that other Constitutional amendments, most notably the 27th Amendment, have been allowed to pass long after their first proposal. The ERA would provide important protections for women’s rights and equality, and should be ratified as soon as possible. This is especially urgent now, with the COVID-19 pandemic putting new strains on women’s career advancement, inclusion in the workforce and economy, and safety due to increased domestic violence.

Sponsoring Rep. Jackie Speier (D-CA), co-chair of the Democratic Women’s Caucus, reintroduced this resolution from the 116th and 115th Congresses to eliminate the ratification deadline for the Equal Rights Amendment (ERA). In a January 21, 2021 press release upon reintroducing this resolution, Rep. Speier said:

“Since our country’s founding, women have been left out of the Constitution – intentionally. We were second-class citizens deprived of basic rights to vote, enter most jobs, or own property. To this day, we are paid less for our work, violated with impunity, and disproportionately suffer the burden of the COVID-19 pandemic. Enough is enough. With President Biden and Vice President Harris at the helm, this will finally be the year we ratify the ERA to the Constitution.”

Sen. Ben Cardin (D-MD), sponsor of a companion joint resolution in the Senate along with Sen. Lisa Murkowski ((R-AK), adds:

“There should be no time limit on equality. Even as we celebrate America’s first female Vice President, our nation is held back as the only modern constitution that fails to enshrine full equality for both men and women. This is unacceptable. Most Americans are surprised to learn that the ERA is not already part of the U.S. Constitution. The states have done their job to make this happen. Now Congress must finally do its job and remove any legal obstacles to certifying the ERA.”

“This is a historic and monumental step forward for all 94 percent of Americans who agree that women should have equal rights in our Constitution. In a time of deep division, here is something we all agree on: there can be no time limit on equality. We thank Senators Cardin and Murkowski and Reps. Speier and Reed for their bipartisan leadership and tireless commitment to equality. Against a backdrop of national turmoil and pain, today shows that progress is still possible, and the ERA is a great unifying opportunity to secure a more equal future for everyone,” added Jenkins, whose leadership of the ERA Coalition has centered the perspectives and participation those whose lives are most impacted by systemic inequities, including Black, Indigenous and Women of Color, gender-nonconforming and transgender women and girls, and nonbinary people.”

Both President Joe Biden and Vice President Kamala Harris have expressed support for the ERA.

What's the argument against eliminating the deadline for ERA ratification?

Opponents of eliminating the deadline for ERA ratification argue that when Congress self-imposes a time limit on the ratification of a constitutional amendment it needs to stick to it, even if it means the process has to begin anew because it wasn't ratified on time, which is relevant in this case given that some states ratified after the deadline and others rescinded their ratification. The ERA could potentially regain the support it had once the process restarts. More broadly, there could be unwanted unintended consequences of ERA ratification, such as forcing women into the draft, eliminating single-sex bathrooms, or weakening restrictions on abortion.

Supreme Court Justice Ruth Bader Ginsburg, who passed away in 2020, supported the goals of the ERA but believed that because the time limit imposed on its ratification by Congress elapsed, its ratification would have to restart from the beginning before it could become part of the Constitution:

"I was a supporter of the Equal Rights Amendment. I hope someday it will be put back in the political hopper and we'll be starting all over again collecting the necessary states to ratify it."

“If the military draft ever returned, the [ERA] would mean that women had to be subject to it. Supporters of the right to abortion that the Supreme Court had pretended to find in the Constitution would use the ERA to strengthen their case, too.”

Some ERA opponents also point out that five states (Idaho, Kentucky, Nebraska, South Dakota, and Tennessee) that previously ratified the ERA have since rescinded their ratification. They believe that ERA ratification that counts the rescinded ratifications would be open to court challenges.

However, based on legal precedent, states’ recission of their ratifications shouldn’t matter: when some states tried to rescind their ratifications of the 14th and 15th Amendments, their original ratifications were counted anyway. Moreover, ERA supporters argue that the ERA’s deadline language is in its preamble, and isn’t part of the text that states vote on. Finally, ERA supporters point to the 1992 adoption of the Madison Amendment (which was adopted by Congress over 200 years after its initial proposal to Congress but wasn’t advanced with a ratification deadline) as proof that there’s no true deadline for making Constitutional amendments.

What is the ERA?

The Equal Rights Amendment was written by Alice Paul, a leader of the women’s suffrage movement and women’s rights activist, in 1923. Paul rewrote the ERA to its current wording in 1943, modeling it on the language of the 19th Amendment. The final, current ERA has three provisions:

The ERA passed Congress by the required two-thirds majority on March 22, 1972 and was sent to the states for ratification. However, anti-feminist leader Phyllis Schlaflymobilized a quick and extraordinarily successful movement to beat the ERA. The anti-ERA movement warned of disastrous consequences if traditional gender roles were eroded. Working together, Schlafly’s organization, Stop Taking Our Privileges (STOP) ERA and the active conservative interest group Eagle Forum warned that the ERA was too broad and that it would eliminate government distinctions between men and women. They also circulated printouts of popular Senate Judiciary Chair Sam Ervin’s invectives against the ERA and claimed that the ERA would lead to mandatory military service for women, unisex bathrooms, unrestricted abortions, women becoming Roman Catholic priests, and same-sex marriage. STOP ERA members lobbied state governments by handing out homemade bread with the slogan, “Preserve Us From a Congressional Jam; Vote Against the E.R.A. Sham.”

An original seven-year deadline was later extended by Congress to June 30, 1982. At the extended deadline’s expiration, only 35 of the necessary 38 states (three-fourths of the states need to ratify a Constitutional amendment) had ratified the ERA, so the ERA isn’t part of the Constitution.

Over the past several years, grassroots campaigns have secured ERA ratification votes in Nevada, Illinois, and Virginia (which became the 38th state to ratify the ERA in January 2020).

In accordance with the traditional ratification process outlined in Article V of the Constitution, the ERA has been reintroduced in every session of Congress since 1982. The only procedural action taken on it — a House floor vote in 1983 — failed by six votes. In the 116th Congress, the traditional ERA ratification bill is H.J.Res.35, sponsored by Reps. Carolyn Maloney (D-NY) and Tom Reed (R-NY) with the support of 178 Democratic House cosponsors (Rep. Reed is the only Republican House member supporting the bill).

While women have made tremendous progress towards equality since the ERA’s deadline passed in 1982, activists argue that the statutes and case law that have produced major advances in women’s rights since the mid-20th century are vulnerable or susceptible to being ignored, weakened, or even reversed. By contrast, the ERA — as a Constitutional amendment — would be far more forceful. Activists also contend that ERA ratification would improve America’s global credibility with respect to sex discrimination (134 nations have constitutional provisions guaranteeing gender equality under the law).

In April 2019, the House Judiciary Subcommittee on the Constitution, Civil Rights and Civil Liberties held the first official hearing on the ERA in almost 40 years.

Sound off in the comments: do you support the ERA's ratification?