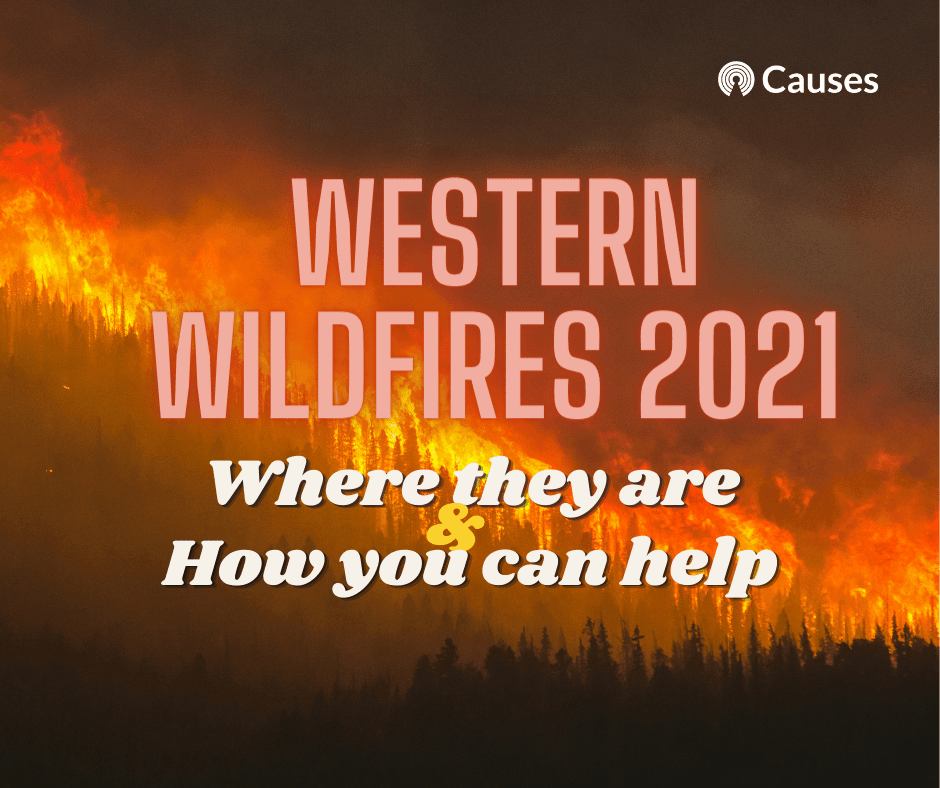 Western wildfires 2021: Where they are & how you can help

Are you concerned about the wildfires in the West?

Larger wildfires have been actively burning in the Western U.S. and Canada for weeks. As of July 22, 2021, 79large fires and complexes have burned over 1.4 million acres.

Track all current large incidents on the Forest Service's site.

The largest fire, the Bootleg Fire in Southern Oregon, has burned over 600 square miles. The fire is so massive and unpredictable that it is creating its own weather of shifting winds and dry lightning. It has been expanding by up to four miles a day and is already the fourth-largest fire in the state's modern history.

For a sense of wildfires' overall impact, consider loss statistics from the 2020 wildfire season: 17,904 structures, 54% of which were residential, were lost.

Thousands of people have been displaced by wildfires. The Bootleg Fire alone had displaced over 2,000 people as of July 15, 2021.

The wildfires in the West are also affecting air quality on the opposite coast. For much of this week, Philadelphia, New York, and parts of Canada have been trapped in a smoky haze. This is the second year in a row in which this phenomenon has occurred.

How you can help

Donating to wildfire relief funds is a direct way to help fight wildfires and support those who they have displaced.

You can also make adjustments to your own home and water use to help reduce drought conditions:

Higher spring and summer temperatures and earlier spring snowmelt typically cause soils to be drier for longer periods, increasing the likelihood of drought and a longer wildfire season, particularly in the western U.S.

These hot, dry conditions also increase the likelihood that, once wildfires are started by lightning strikes or human error, they will be more intense and longer-burning.

Federal Forest Service projections show that an annual temperature increase of just 1 degree Celsius would boost the median burned area per year by as much as 600% in some types of forests.

Evidence from Columbia University’s Lamont-Doherty Earth Observatory suggests that human-caused climate change is one of the primary drivers of the increase in wildfires.

According to The New York Times:

“Many fires in recent years have been caused by downed power lines serving California’s utilities. State officials have determined that electrical equipment owned by [Pacific Gas and Electric (PG&E)], including power lines and poles, was responsible for at least 17 of 21 major fires in Northern California last fall. In eight of those cases, they referred the findings to prosecutors over possible violations of state law.

“Investigators have yet to determine the cause of the deadliest of the current blazes, known as the Camp Fire, which has killed at least 56 people and destroyed virtually the entire town of Paradise, about 90 miles north of Sacramento. PG&E disclosed in a regulatory filing on Tuesday that an outage and damage to a transmission tower were reported in the area shortly before the fire started last week.”

The U.S. suppresses 95% of all wildfires, at great cost and with questionable efficacy. According to The Wall Street Journal:

“About 57% of California forestland is owned by the federal government while most of the rest is private land regulated by the state… Once upon a time the U.S. Forest Service’s mission was to actively manage the federal government’s resources. Yet numerous laws over the last 50 years, including the Endangered Species Act and National Environmental Policy Act, have hampered tree-clearing, controlled burns and timber sales on federal land.

The Atlantic published a lengthy article in 2018 detailing how human technology is the main cause of loss from fire, noting that reducing the impact of fires will require changes to how people live, and not just to the infrastructure that lets them do so.

For over 100 years, federal and state firefighting agencies have focused on extinguishing fires whenever they occur.

This strategy is now proving to be counterproductive, as many landscapes evolved to burn periodically. When fires are suppressed, vegetation builds up thickly in forests; when fires break out, they become more severe and destructive.