!
Are you ready to vote?
1
Register
2
Make a Plan
3
Volunteer
Strengthen our Democracy with Civics Education 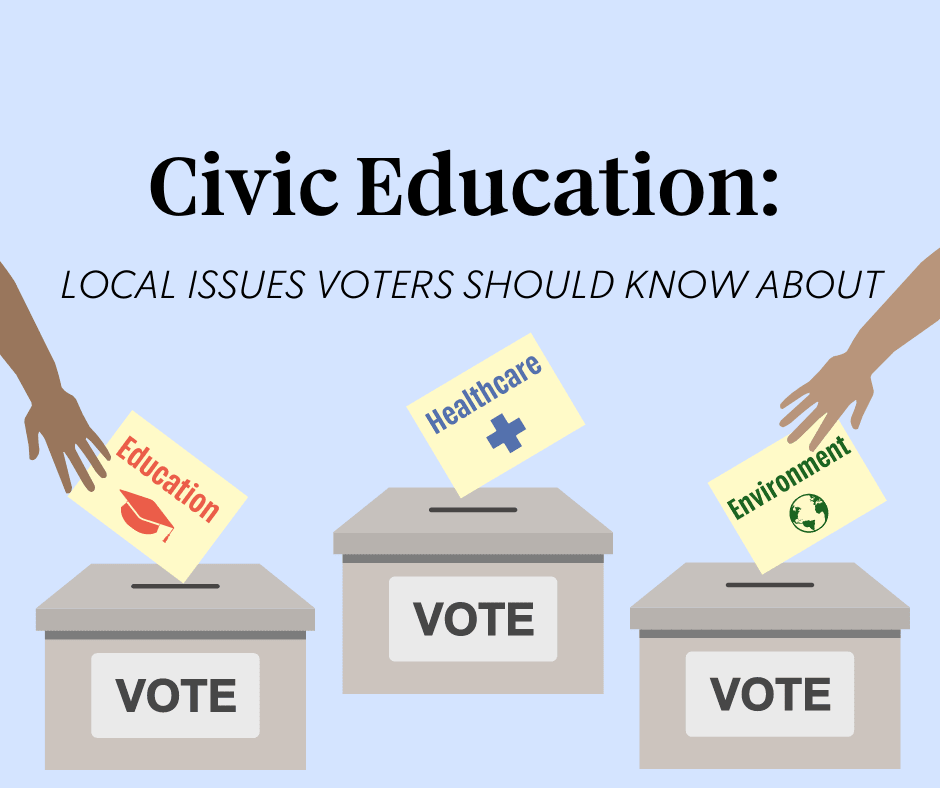 Local governments hold vital powers over issues that directly affect your community, and policies at the local level can expand to nationwide movements and federal laws. Issues vary across cities, states, and regions, but below are five significant local issues worth paying attention to.

As the COVID-19 pandemic continues, many local governments are clashing with their states over mask mandates. Nine states have banned local mandates including Texas, Florida, South Carolina, and Utah. But some school districts are still implementing their own mask requirements.

No federal mask mandate has or likely will be enacted, meaning the issue will likely remain at state and local levels.

The Treasury Department is apprehensive to conduct the economic experiments state and local governments can enact.

For example, the idea of a Universal Basic Income (UBI) - where governments give citizens money - has grown in popularity in recent years and was even implemented in Stockton, California, in 2019. This inspired other cities to adopt similar programs--nearly two dozen in America so far. In Minneapolis, Minnesota, a trial program was approved earlier this year in June, and after Santa Fe tested out a $400 per month program, the state of New Mexico is considering implementing a statewide version.

Laws surrounding what can and cannot be taught in public schools have often caused controversy throughout U.S. History, from teaching evolution, to book bans, to the recent clashes over the implementation of critical race theory (CRT).

Eight states have passed legislation effectively banning CRT, although not mentioning it specifically, and nearly 20 additional states plan to introduce similar legislation that limits training and teaching related to CRT.

A proposed initiative in Washington, for instance, seeks to prohibit training teachers on specific topics about racism and sexism. If the measure receives a sufficient number of signatures, it will appear on the ballot in 2022.

Do you know what your local school districts are teaching?

State and local governments are the day-to-day enforcers of environmental protection, from vital services like sewage treatment, garbage disposal, and recycling to region-specific problems such as deforestation, wildfires, water pollution, and drought.

In Florida, a record number of manatee deaths due to water pollution have resulted in the state announcing $53 million in grants to improve water quality.

In Connecticut, testing revealed dangerous chemical contaminants in drinking water and has resulted in an expansion in testing and treatment throughout the state.

Whether it’s in Florida, Connecticut, or in your local pond, environmental policy is an ongoing and significant issue to stay up to date on.

Marijuana legalization began at a local level with decriminalization in California, Oregon, Alaska, Washington, and Maine. And the past decade has seen a growing number of states adopt recreational-use legalization--and a push toward expunging past marijuana convictions.

In New York’s 2021 legalization law, certain marijuana convictions will be automatically expunged, helping to wipe out some of the obstacles that come with a drug conviction, including securing employment, getting loans, and homeownership.

Federally, the drug is still illegal, but more and more states are moving towards legalization - and record expunging. And some localities are expanding their efforts to drugs beyond marijuana: Denver and Oakland, California, recently decriminalized psychedelic mushrooms.