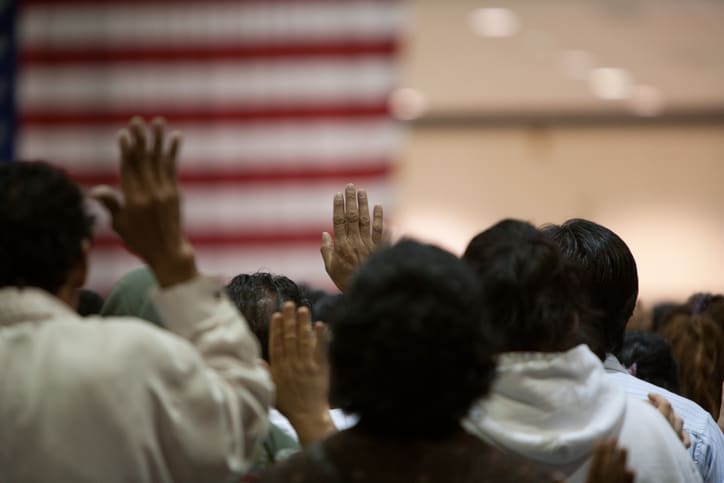 Do you consider yourself well-informed on immigration issues?

Immigration issues occupy center stage in today’s political landscape, but to what extent are people’s views informed by facts?

USAFacts, a non-partisan, not-for-profit civic initiative aimed at making government data accessible and understandable, has published a timeline showing 170 years of immigration policy and the corresponding ebb and flow of the United States’ immigrant population.

It paints a fascinating picture without drawing conclusions or advocating for particular policies. Here at Countable, we want to know what you see in the data, and how – if at all – it influences your positions on the issues of our day.

Here is some of what caught our eye. All information below comes from USAFacts, unless otherwise attributed.

The U.S. Census Bureau first started tracking foreign-born populations in 1850, when they composed 9.7 percent of the total population. That proportion reached a high of 14.8 percent in 1890, then dropped to a low of 4.7 percent in 1970.

It has been growing steadily since then, and as of 2016 – the most recent year for which data are available – people born outside the United States account for 13.5 percent of the population.

Unfettered immigration from Latin American countries was permitted well into the 1920s.

That changed in the 1930s, when 1 million Mexicans and Mexican-American citizens were forced to leave the United States because people believed they were exacerbating the Great Depression.

In a rapid turnaround, the Bracero Program was launched in 1942, wherein the United States recruited 4.6 million Mexican workers for agricultural jobs.

In 1954, the United States cooperated with Mexico to remove more than 1.3 million unauthorized immigrants because Mexico was losing agricultural laborers.

Currently, agricultural labor shortages are widespread after migration across the southern border started slowing down in 2005, according to news reports, and immigration policies are believed to be one of the factors behind the problem.

A history of “undesirables”

The United States has a long history of trying to exclude people it deems “undesirable,” although the categories have shifted over time.

In 1850, citizenship was restricted to white people. The Naturalization Act of 1870 created a naturalization pathway for people of African descent, but continued to exclude other people of color.

The 1882 Chinese Exclusion Act did exactly what it sounds like, and wasn’t repealed until 1943.

The Immigration Act of 1903 restricted immigration for four categories of “unsavory” individuals: anarchists, epileptics, beggars, and pimps. Updates to the law in 1907 and 1917 added people with diseases or disabilities, “idiots,” polygamists, homosexuals, political radicals, and the illiterate to the list of undesirables, and further restricted immigration from Asia.

The Internal Security Act of 1950 banned communists from admission to the United States.

Subsequent measures have been less explicit about specific groups they might have been targeting.

What do you think?

What stands out to you in the USAFacts data? How – if at all – does it influence your views on immigration? Hit Take Action, then share your thoughts below.